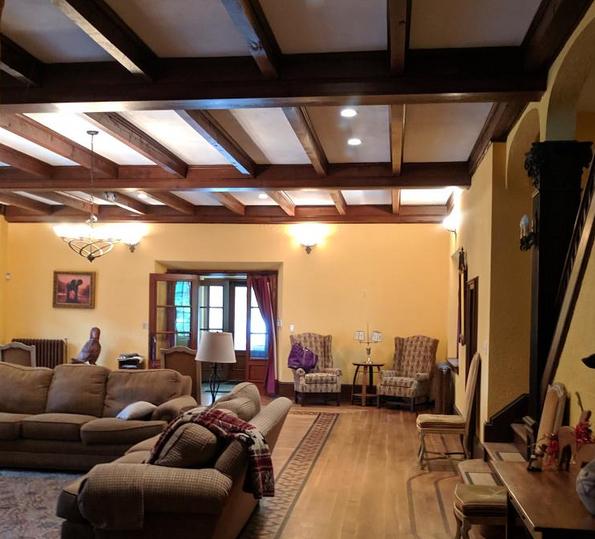 Interior of the Brown Mansion. 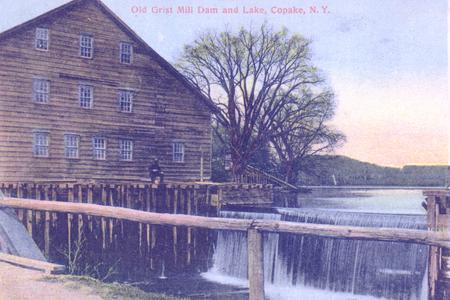 A Brief History of Robinson Pond and Taconic Shores

Taconic Shores was originally part of the lands on which Mohican Indians hunted, fished, trapped animals and farmed. Unfortunately, the native Americans left no written history of their lives. By the start of the 19th century, virtually all of them in the Roe Jan area had long been pushed out of the area. The only printed record regarding native Americans being specifically at Robinson Pond is a newspaper article about a Mohawk Indian couple, Paul and Phebe Pry who lived in the area. According to the article, a Massachusetts man, formerly of Michigan, alleged that the couple’s little boy had actually been kidnapped several years earlier from Michigan. The bases for the accusation were that the accuser knew that a boy had been kidnapped, that the Prys’ son who appeared to be white (and may have been fathered by a white man), was about the age that the kidnapped boy would have been. After John Dinehart and several other town residents confirmed that the child had been born in the Copake area, the couple was exonerated.

Taconic Shores was once part of a large land grant that Scottish born Robert Livingston received in 1715 from the British crown. For many years, the Livingstons leased land to farmers via a feudal style of rent “in kind,” meaning payments of crops and or animals the amounts of which the Livingstons decided unilaterally.

The earliest records of settlement of the Taconic Shores area go back to at least 1778 by which time the Livingstons had a mill built at the pond for Nicholas Robison, who was their tenant. It had what was described as "four run of stone," and used water-power equivalent to 125 HP. It was able to grind eight hundred bushels of grain per day.

In October 1810, John Swift Livingston (JSL) hired Augustus Tremaine to survey a large tract of land through which ran the Roeliff Jansen Kill. The tract included what were or became three farms. One of them included Robinson Pond (misnamed for Nicholas Robison), plus a dam and the Unity Mill Farm. The survey was then used to lay out several additional farms.

A second farm, the "Marks Drom," was west of the northerly 3/4 of the pond (i.e., the natural part) plus likely, the section running toward the dam. The third one was the Rachael Robinson farm “at the north end of the pond.” We would surely like to know which farm occupied their properties, however, the boundaries are described in part with references to long gone trees and stumps. The farms changed hands** as shown in the footnote below.

In 1909, New York City publisher Ernest Clive Brown purchased most of what is now the Shores, a total of 357 acres, allegedly from Nicholas Robison’s heirs. Brown lived in the house next to the dam while in 1915 he had the mansion constructed. Many of the beams in the mansion were milled from oak trees cut down from the island in Robinson Pond. As a boy, Howard McGee, Copake’s postmaster for several decades aided in the construction, hauling stones for the outer walls.

Brown, a contentious man became involved in multiple lawsuits, usually with trespassers. Thus, in 1912, he appeared in court charged with battering a trespassing fishermen’s rowboat. Another case developed after he erected a fence near the pond to stop cattle owned by neighbor Frank Sherman from drinking from it. Initially Sherman won the case, but on appeal, Brown prevailed.  In 1915, a huge storm washed away the pond’s wooden dam. At his own expense, Brown had it replaced with a cement one. In 1933, Brown sued Harvey Roberts, owner of a small plane that periodically brushed the tops of the trees on Brown’s estate. However, Brown died before the case came to trial.  Brown and his wife were buried in a small plot on his former estate.

Ever wonder about the little brick structure by the dam? A later owner of Brown’s estate, paper manufacturer Paul Vernon, for whom a nearby road is named, ran a hydroelectric operation on the dam and sold the electricity to neighboring houses. It may have been when Vernon owned the pond when during at least one winter, local businessman Albert Bristol hired a crew to cut ice from Robinson Pond and haul it to the Borden's plant across from the Copake Railroad Depot. Vernon’s successors to the estate were ship builder Arthur Blair, a man named Dan Davis  and Shep Gordon, celebrity manager of Pink Floyd, Alice Cooper and other musicians. Cooper spent some time at the mansion,

In 1957, a big event occurred in Copake when Taconic Shores Inc. bought the property and offered cottages in “a brand-new resort development that tops them all.” The new community brought an infusion of money into Copake, boosting the revenues of virtually all of Copake’s businesses and craftsmen. It still does, as the Shores also provides the community with volunteers for town committees,’ members of the Grange, guest speakers for the library and parishioners for local churches. Not to toot our horn, but “TOOT, TOOT.”